From the ancient streets of Rome to the undulating waterways of Venice, the serene beauty of the Italian Lakes, and the dazzling charm of the Amalfi Coast, there is a different splendour in every corner of Italy. The historical cities of Italy are an excellent holiday choice and attract the attention of both domestic and foreign tourists every year. So much so that as soon as you step on Italian soil, it is possible to notice its ancient history and culture everywhere. Italian cities with a strong past like Rome show their visitors the colossal traces of a unique ancient empire, Papal kingdom, and Renaissance noble families; Smaller cities such as Florence, on the other hand, promise pleasant moments to tourists who breathe the air of the Middle Ages during their trip.

The unification of Italy into the single Kingdom of Italy, also known as its Risorgimento, took place relatively early in the early 19th century, so the diversity of its small states and kingdoms is intact. The continuation of the unique cultures of these regions, which can speak the same language, is quite an important feature that makes Italian cities magical. So much so that each region has its own dialect, cuisine, history, culture, and unique tradition.

The diversity of its culture and immense historical heritage are just some of the many reasons people love Italy. Over the years, Italy’s rich artistic and architectural heritage has inspired many artists. The country is filled with many architectural and artistic treasures dating back to pre-Roman times and surviving. While every era has its treasures and devotees, Italy is also known for its wonderful artists, architects, engineers, and inventors who changed the world. Unique artists such as Michelangelo, Leonardo da Vinci, and Titian have also consolidated their Italian identity with their success.

The country is a haven for anyone who wants to explore architecture and design over the centuries. It can be said that it is impossible to walk around every street of the cities of this country without hitting a piece of history. With the most world heritage sites globally, there are plenty of reasons to visit Italy, at least in this respect.

Rich Heritage of Art and Architecture

When architecture, art, and design are mentioned, almost everyone thinks of a photo frame unique to Italy. As a result, Italy is home to more UNESCO World Heritage Sites than any other European country. Of the 55 sites in Italy, 50 are cultural, and 5 are purely natural. The birthplace of the Roman Empire and Renaissance, Italy is home to Pompeii, Herculaneum, and Torre Annunziata, the historical centers of Florence, Naples, Rome, and the Dolomites. It is still possible to discover the preserved remains of the ancient Roman cities of Pompeii and Herculaneum, which were buried by the eruption of Vesuvius in 79 AD.

The natural landscapes that Italy offers to its visitors are truly magnificent. From majestic mountains to picturesque lakes, sunny shores, and dark green forests, there is an excellent variety of natural beauty. Between the Dolomites and the Italian Alps in the northeast and these stunning mountains and valleys, Italy’s magnificent lakes provide a visual satisfaction to thousands of tourists every year.

Italian cuisine is already a favorite for most people around the world. A trip to Italy is guaranteed to try more of the classic dishes like pizza and pasta, as well as the authentic flavors of the cities here. Specialties from different regions of Italy; Cheeses such as Pecorino and Fossa, bread such as Focaccia and Coppia Ferrarese, sauces such as Carbonara and Pesto, and market-specific delicacies in each region can be sampled. Being involved in food tourism in Italian cities will become an unforgettable experience with their food and their fragrant coffee and gourmet wines.

the pristine coasts of Italy are washed by the waters of five seas, namely the Mediterranean, Adriatic, Ionian, Tyrrhenian, and Ligurian. Almost all of the 20 Italian regions are located in locations with access to the sea. With this feature, Italy is a frequently preferred destination for summer travel. There is also the option to explore Italian cities that appeal to everyone, from luxury resorts to rustic and historical places. 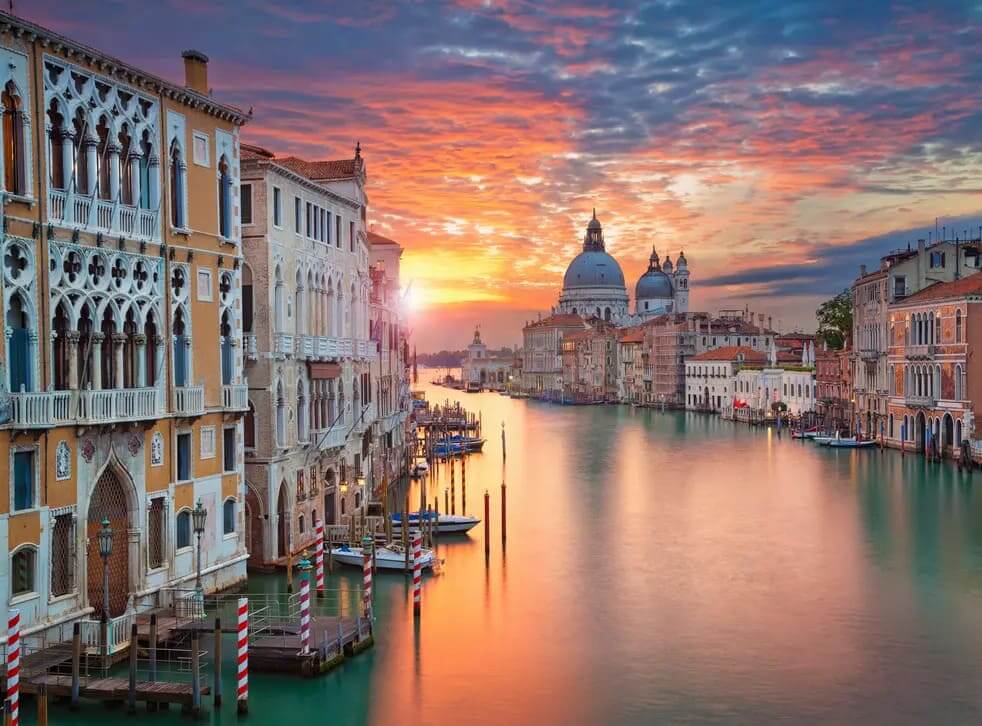 The cities of Italy offer a seductive landscape, historical and ancient sites, museums, and excellent cuisine and ambiance. Italy, one of the most attractive destinations in Europe, is waiting to be discovered by everyone with its many different features in this sense. Each of the Italian cities, which has managed to blend its iconic history with today’s fashion, is an important place with its unique character and charm. The main cities that attract the most attention in Italy are:

The center of the Roman Empire, Rome, is full of ancient icons. Famous for its Pantheon and Roman Forum, beautiful squares, stunning fountains, and hundreds of street cafes, this city is among the remarkable tourist attractions of all periods. The capital of Italy and the first stop for many tourists in Italy, Rome offers a dazzling variety of sights and experiences. At every turn, it is possible to discover ancient monuments, ornate medieval and Baroque churches, art-filled museums, and Renaissance palaces here. Located in Rome, the Ancient Colosseum is one of the most iconic places in the world. Today’s modern Rome is a vibrant and enjoyable city. St. Peter’s Square and the Vatican are also open to visitors in Rome, with excellent restaurants and nightlife.

Unlike anywhere else, Venice is a unique city built on water in the middle of a lagoon. Venice is one of the most beautiful and romantic cities in Italy and one of the most popular for visitors to Italy. The heart of Venice is Piazza San Marco with its magnificent church, St. Mark’s Basilica. There are many museums, palaces, and churches to visit, and it’s always fascinating to wander the canals of Venice and get lost in the maze of narrow streets. Venice is in the northeast of Italy and historically forms a bridge between East and West. This preserves the Byzantine spirit, not found anywhere else in Italy. With its canals full of gondolas and beautiful architecture, ‘Venice the Floating City’ fascinates its visitors with its unique texture that cannot be found anywhere else in the world. 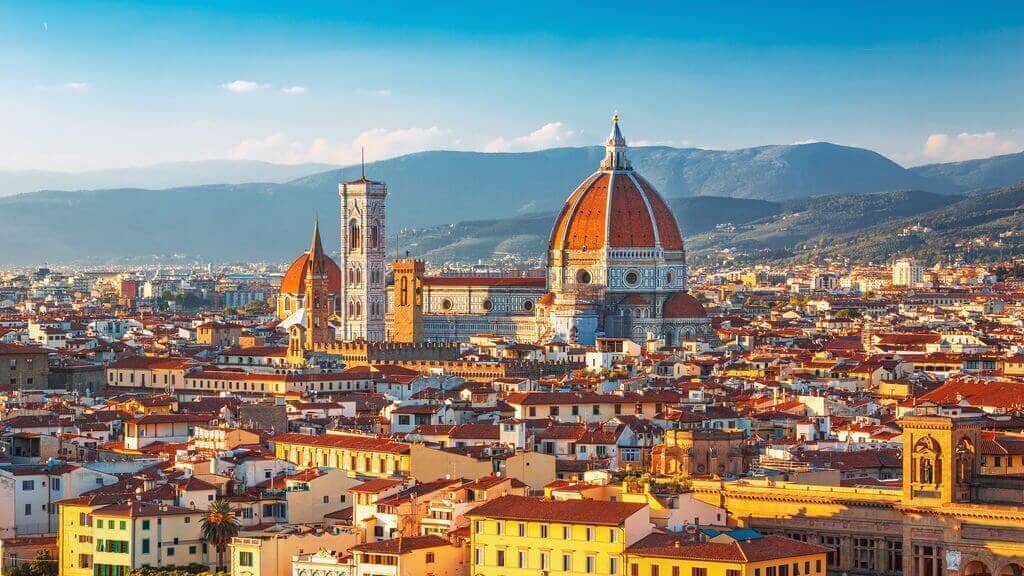 Florence is one of Italy’s most important Renaissance architectural and artistic centers. Florence, the capital of Tuscany, is undoubtedly one of the most romantic cities in Italy. Located on either side of the Arno River, its highlight is the iconic Duomo with its magnificent Renaissance dome. Florence has several excellent museums with many famous paintings and sculptures, including Michelangelo’s “David” and Botticelli’s “The Birth of Venus.” There are also Medici palaces and gardens in this perfect city. Florence is in the Tuscany region and is the gateway to exploring Tuscany’s smaller towns and countryside. It is possible to go to Piazzale Michelangelo at sunset and enjoy the breathtaking view of the red terracotta roofs of the city.

Milan, one of the wealthiest cities in Europe, is known for its stylish shops, galleries, and restaurants and has a faster pace of life than most Italian cities. Galleria Vittorio Emanuele II, an elegant 19th-century arcade in Italy’s oldest shopping center, is a must-visit for anyone passing through Milan. It also has a rich artistic and cultural heritage. With its beautiful marble façade, the Gothic Duomo is one of those places that visitors describe as magnificent. Da Vinci’s The Last Supper painting is one of Milan’s most exciting features. La Scala, located here, is one of the most famous opera houses in the world.

Naples is one of Italy’s most vibrant cities. Located on the coast south of Rome, this vital city retains much of its Baroque character and is a starting point for excursions to Pompeii, Herculaneum, and the Amalfi Coast. It has many historical and artistic treasures. Famous for its pizzas and desserts, this city is indispensable for visitors fond of the taste. The National Archaeological Museum of Naples and the 13th-century Gothic cathedral are also must-sees. The lively Spaccanapoli district, with its winding streets filled with shops and churches, always gets thumbs up from Naples’ visitors.

The city of Verona, made famous by Shakespeare, is the setting for Romeo and Juliet. Their tragic stories come to life here, as visitors can see Juliet’s famous balcony, among many other locations featured in the play. Verona is also renowned for the Roman Arena, the venue for Italy’s third-largest and best opera festival. The city is also filled with Roman ruins, numerous churches, and many lively cafes. The surrounding region boasts some of Italy’s best wines and the beautiful Lake Garda. Verona is the fourth most visited city in Italy.

Bologna is known for its beauty, wealth, cuisine, and leftist politics. Its straight streets are lined with passages, making it a wonderful walking city in any weather. It has one of the oldest universities in Europe. Bologna is the largest city in the Emilia-Romagna region of northern Italy, and Piazza Maggiore is one of the largest squares in Europe. It is considered the culinary capital of the country, even among Italians. Its beautiful, colonnaded streets, set in a grid-like pattern from the Middle Ages, take visitors to impressive churches, graffiti-adorned squares, and tempting restaurants. The Madonna di San Luca Shrine to the southwest of the city center has panoramic views.

Genoa is the principal port of Italy, located in Liguria on the northwest coast of Italy. Genoa has a fascinating modern aquarium, an exciting port area, and a historic center said to be Europe’s largest medieval quarter, with numerous churches, palaces, and museums. Genoa, the gateway to the Italian Riviera, is known in history as one of the world’s most significant trading powers. The medieval texture of the past is still evident, offering a tight network of atmospheric streets. It is possible to discover artisan shops, hidden churches, and historic restaurants here, where you can enjoy more of Italy’s most famous dishes. The city is also home to Europe’s first bank and Italy’s oldest football team. 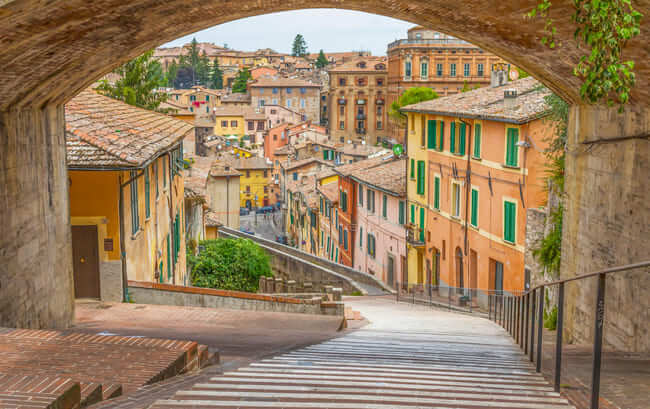 Located in the Umbria region of central Italy, Perugia is a very cosmopolitan city with two universities. It hosts a world-famous jazz festival in the summer. The University for Foreigners located here is a great place to learn Italian. Perugia, a walled city on top of a hill with stunning valley views, has several important monuments and a good central square. Its history dates back to the 9th century BC.

While Pisa is most famous for its leaning tower, there is still much that tourists don’t know about this destination. Offering a lively café and entertainment scene, the city is home to the University of Pisa, one of Italy’s most distinguished universities, evidenced by its high student population. Food markets on the Arno River, incredible ice creams, and stunning sunsets are a must in the city. Pisa, the beaches are also just a 15-20 minute journey away. Thus, after discovering the Mediterranean, it becomes possible for visitors to share this pleasure for a short time.